Joslin led the man into his bedroom.
“So whats your name big boy?” He asked, squeezing the man’s bicep as he tossed his shirt off.
“Luke.” He nodded.
“Ah.” He smirked. “I’m Joslin. I’m just telling you that so you know what to scream.”
The man chuckled as he lifted the tiny boy and tossed him on the bed. Joslin bounced lightly and slid off his tight jeans, spreading his legs wide.
Luke shucked off his own pants and boxers, revealing his huge dick.
Joslin licked his lips.
“Damn…” The thing had to be atleast ten inches long…
Joslin’s dick began to rise just at the sight of it.
“Excited?” Luke licked his lips.
“Very.” Joslin purred as Luke grabbed some lube and slicked up his cock, getting it nice and wet before aligning it with Joslin’s hole.
Joslin was a bit surprised, no men used lube for him.
Luke slowly sunk into Joslin’s tight heat inch by inch.
“Ohhh…” Joslin shuddered at the feel of it.
Luke paused for a few minutes before thrusting his hips.
They set the pace. It was slow, very sensual. It wasn’t like all the other fucks Joslin had. It was nice. If they loved each other it would be making love.
“Oh hell!” Joslin cried loudly, head thrown back. He was so fucking close as he felt Luke pounding into him sweetly.
Luke let out small groans and grunts, animalistic noises.
This was the best sex Joslin had ever had by far.
“OH GOD!” Joslin shouted, hips lifting to meet Luke’s thrusts.
The man placed a hand on the back of his neck and kissed him sweetly, deeply. Again it gave Joslin the feel of making love. And maybe that was why he said what he said next…
He came hard with a loud scream that could be heard outside the house for several feet. Anyone walking by knew very well what was going on.
“OH CHORD!” The second he said it his eyes bulged. What the fuck? Why had he just called Chord’s name.
Luke came before pulling out and growling.
“Whos name did you just say?” He snarled.
“A friend’s…” Why did he care? It was just a fuck.
Luke lifted Joslin by his neck and pressed him against the wall.
“You don’t say someone else’s name when I’m giving you the honor of being fucked by me.”
Joslin snorted which earned him a punch in the face. Luke then dropped him, dressed and walked out. Joslin stared after him incredulously.
He sat there for a moment as his eye hurt terribly. Yeah he was gonna have a black eye in the morning…
Why had he just called Chord’s name?
He pretended he had no clue why but deep down he knew…
He wanted Chord.
He wanted Chord making sweet love to him like that… He didn’t just want it. He needed it badly…
He groaned and laid down on the floor.
No relationships…
But he wanted one so bad…
__________________ 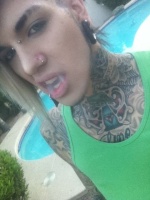