Okay, so... I wanted to do this because my desire to continue my fic story from october is null and void now, but the story was fun. I'm just lazy.

Story: Three people connected by the past try to make new lives for themselves in a new city.

Who I will be playing: Since I only have three of them, I'm going to play all three.

-Jeff Jarrett: A bootlegger. He's not from around Chicago, due to his accent. He used to be an entertainer in another city years ago, but not much else is known about him. He keeps quiet and never tells anyone more than his first name, never his last, and that he was from the deep south.

-Debra Marshall: An entertainer for a speakeasy, and Jeff's partner from back during their vaudeville days. She followed him to Chicago as he's the only man she ever felt comfortable around, seeing him as a little brother.

-James Storm: He's the bouncer for the speakeasy Debra entertains at. He knew Jeff from when he was a kid and followed him to Chicago in hopes that he could get him a job.

What I am hoping for: A couple of people, actually

********Please, please PLEASE though if you're interested when we start the rp, try to give me more than one sentence. I can't tell you how hard it is for me to reply when the response is only a sentence. I'm one of those people who require a decent paragraph. I just can't do the one sentence thing, especially with this type of a thread. I realize not all replies will be the same length, but it's so hard for me to reply else wise. I'd rather have one really long reply than several small replies in a day, especially since I'm not on all the time.******************

Ideas for character roles: Your character can be virtually anything! Here are some ideas (please do not think I want you to play any of these, I'm just trying to provide inspiration) Police officers, bootleggers, entertainers, bartenders, young socialites, bouncers, musicians, gangsters, small time thugs, hit men.

Smut: Yes, please. I mean, it's not required. I don't need to write it, but sometimes there's a connection between the characters that requires it. So if you want to do this with me, keep in mind that there is always potential.

Sounds interesting i'll do it
i was thinking Chris for James and/or maybe Kazzy for Jeff.

I would totally be interested in this too. I can use any of my characters, thought I don't like femslash I suppose I may could attempt it if you want me too. And I am able to write paragraph posts as you see in Smilers lounge. I like the idea of being a bouncer, a musician or a hitman
__________________

Mattie, if you want to do Chris Harris with James, that'd be great!

Mike, if you want to play someone with Jeff, that'd be great as well! As for the femslash, we can try it and I will avoid the sexytimes if you don't feel comfortable XD

I'll leave this up until tomorrow night when I can work on the first post.

Oh yay! I love Jeff/Mike hehehe and I kinda wanna see if im capable of Femslash. I have never done it and never wanted to but as a writer(An amateur one heheh) I would like to try and see but I dont know how good ill be at it. Sorry

How will three people thread? Will someone answer one post, and the someone else answer a post? Im fifteen and retarded, you must explain things to the idiots of the site heheh XD
__________________

We all gotta start somewhere, and if it's something you're not sure of, it's best to try it out with a friend, am I right?

Basically what will happen is I'm going to post my post, and you guys will reply to it like normal. You can also reply to each other especially considering we are in a bar like setting so chances are everyone will come across each other at some point.

The only thing I ask is that if your guys characters start chatting, don't get too far ahead of me XD I probably will only get once chance to post a day.

Chris Harris is a barman at the speakeasy that James and Debra work at. He ran away from his rich family after finding out a dark secret. Is often call either Wildcat or Cat. 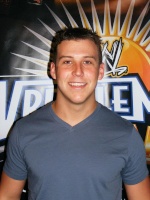