Slash Central :: Outside of the Ring :: Shopping Malls

It only happened twice a year.

Right after Christmas, to lose the fall goods. Right after the forth of July to lose the winter stuff. It was an endless cycle, but one she absolutely loved. It wasn't as if she was hurting for money- oh no. It was because her mother always told her to shop well. If you could buy something was originally fifty dollars for twenty, then it was worth the wait.

She made her way around the store, her stilettos making slight indents in the plush red carpet of the store as she rummaged around through the bins of underwear. Lacy panties, bright colored thongs- all at fifty percent off. Half of her wanted to just take the bin that was all in her size and buy the whole thing. She debated, shifting her weight from hip to hip, before snatching up the entire bin of panties into her arms. She got a dirty look from the woman beside her.

"Oh honey, with that butt? You ain't a size six so get over it." Debra said sweetly to the portly woman. This was a semi annual sale. The kid gloves were off. She teetered over to the selection of bras, some how managing to root through them, gathering up another whole bin of those as well. She made her way over to the counter, trying hard to see where she was going with the mound of underwear in her arms. The woman from before however, wanted her revenge. She hip checked Debra in the side, sending the woman who walked vicariously in her sky high heels sailing to the ground as her purchases rained down on her.

Debra sat flat on her ass, confused, with a pair of panties perched on top of her golden blonde hair. "Well... dang." 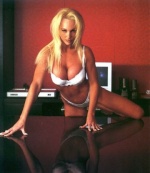 Maria had been shopping a few aisles down when the altercation began. .She'd been one of the first people in the store that day. Say the word shopping and Maria Louise Kanellis was there. Making her way over to the blonde she chuckled softly. "You need a hand?" the red headed Chicagoan asked with a smile.

Debra looked up at her, pouting her red lips, and nodded. "Yes. Ah need a hand. Ah dropped mah panties!" She giggled slightly. "Sorry, couldn't help it." She extended her hand to Maria to help her up.

Debra's potential panties were all over the floor, along with her selection of bras. "...Ohhh dear. It's like mah whole chest of unmentionables exploded very publicly." She grinned a little. It was funny, and she did have a sense of humor.

Maria helped the blonde to her feet before bending down the clean up the mess in front of her, chuckling at Debra's comment as she did so. "Sure does seem that way doesn't it?" Maria smiled. She had the items back in there proper bins within a minute or two. "There you go."

Debra straightened her tight red pencil skirt and matching suit jacket. She put her hair back into place, and when no one was looking- jostled her large breasts back where they should be. She turned back around and regathered all the things she wanted, quickly paying for them before something happened.

Once she had her bag handles around her arm, she stuck out her hand. "Ahm Debra Marshall. Thanks for your help!"

Maria smiled and shook Debra's hand. "Maria Kanellis," the red head said. "and it was no problem at all, what that woman did was uncalled for."

"Well... ah was a little rude. But... she wasn't gonna fit into those! Who is she even kiddin' ah swear. Did you see that butt? That was like two a mine PLUS..." She looked at Maria for a moment. "Well... you're tiny, so like... three and a quarter of you put together. Ugh!" She rolled her eyes. "Some people. It is very nice to meet ya, Maria. You were the one good thing about this shoppin' experience, that's for sure!"

Maria blushed. It'd been a while since she'd had an interesting experience like this one. "Some say I'm a bit of a shopoholic," Maria chuckled. "So this was fun."

"Ohhh me too! Ah love to shop. Ahm hopin' to get a few new swim suits. First of the year comes out now, an' the best sales on im' start too. Oh! An' maybe some shoes..." She trailed off, thinking about all she wanted.

"Ya'll aren't finished with your shoppin' are ya? We could go together. It'll be fun!" She offered. "Shoppin's twice as fun with a buddy!"

"I don't have anywhere to be anytime today so it sounds like a plan to me," Maria smiled. "I haven't had a shopping buddy in ages!"

"Me neither." She sighed wistfully. "Ah jus'... ah don't know. Ah was never very good at havin' female friends. Guess ah've jus' always hung out with the boys! An' unless they get to see the stuff modeled, they don't make good shoppin' buddies." She snickered a little. "Alright then 'Ria- where did ya wanna go first?"

"Most people get tired too quick to shop with me," Maria chuckled. "I'm good to go wherever you wanna go.

"Alright then! Let's go hit up the swim suits. Ah need a new practical one, one for lookin' good in, an' a sexy one. Though... the last two are kinda the same." She grinned and linked her arm with Maria- leading the two of them toward Sunset Bay Swimwear.

"Do you need a new suit, 'Ria? Oh... an' please forgive mah fowardness. Ahm southern- we're touchy feely down there. If ya don't like it, jus' shove me away, ah'll get the hint."

Maria laughed. "It's alright, one of my best friends is southern, I'm used to it." She looked around at the suits. "I could use a new suit or two though."

"Oh good! AH was hopin' ah didn't creep ya out." She laughed and shook her head, letting go of Maria's arm to start looking through suits. She picked out a few for her self, and then came across a cute yellow and blue bikini. "Hey 'Ria! Check this out girl- ah think this would look hot on you- 'specially with that red hair of yours." She said and handed her the suit.

Maria glanced at the suit and smiled. She loved it. "I HAVE to get that," Maria said. "You Debra, are a fashion genius."

"Well ah love color." She beamed at the comment. "An' thanks for that, Ria! Ya'll jus' made mah day. You are gonna turn soooo many heads in that." She pulled out a purple one for herself. "Mmmmph, ah like this one. It'll go well with mah complexion. Ya wanna go try these on?"

Slash Central :: Outside of the Ring :: Shopping Malls