The Rock Bottom Of The Rattle Snake's Den.

The Rock Bottom Of The Rattle Snake's Den.

It was supposed to be nothing but a standard show, he was wrestling with Rob Van Dam at the time. The show started as normal, Dewayne was pumped up, electricity running wild in the air as his music played, loud through the stadium and drawling cheer from every direction as he made his way to the ring. Dewayne thought he was fine, sure his knee had been bothering him but it wasn't that bad at all. He was even fine while he was bouncing around and waiting for Rob to enter the ring.

The bell rang as it normally would, the two large men locked up, pushing against each other as they whispered, making sure they were clear on what they were doing. The match went back and forth, the fan's jeering and leering at Rob tonight. Dewayne was a good heel, a good face, he was a good wrestler period and tonight the fans were eating him up. Dewayne lived to feel the back under him. Feel all the adrenaline in his system as he set up for the Rock Bottom. To bad tonight he couldn't enjoy it like usual, no tonight he was focused on his knee. And he had very good reason for that.

Just as he lifted Rob his knee buckled beneath him, he was professional, he didn't yell or scream like he wanted to, he just knelled down, cursing as Rob fell on top of him. Rob didn't look happy one bit, he was pissed because he had been dropped, all until he realized something wasn't right. They stayed down, struggling to their feet as the whispered.

"You alright Dewayne?"
The Rock was too fucking proud to say no but he couldn't go on. "Yeah but we need to finish up quick..."

And that they did, they finished the match almost fifteen minutes before they were supposed to. Once they went to a commercial referees came to help Dewayne limp back stage.
He was rushed to the hospital.
And that left Rob to explain what had happened to everyone.

Steve had been watching the tv screen distractedly backstage when it happened. The stream of curses he let out when he saw Dwayne's knee buckle made the few people around him scatter, and he was left alone to fume.
His relationship with Dwayne was... complicated, and Steve didn't like complications, so they never talked about it, and kept on with their weird "friendship with benefits" over the years.

Steve was still wondering why he should give a flying crap if Dwayne was hurt as he made his way through the hospital. He knocked twice on the door of Dwayne's room, loudly, and entered without waiting for an answer. He stares at Dwayne laying on his bed for a bit, then took a seat by his bedside.
He crossed his arms, glaring at Dwayne.

"That was a pretty stoopid way to get injured. What do ya got to say in yer defense?" 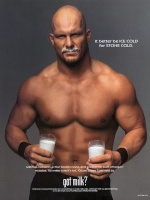 Dewayne glared at Steve, rolling his eyes at how predictable and rude the man was sometimes. He watched his movements closely with a trained eyes. He wasn't really sure why Steve was here in the first place. What did he care about his injury.

"I say," He paused, thinking but he didn't need to think long. "You need to back the fuck off before I get up and shove my foot up your ass." He responded with a growl at the other man. "What in hell do you want anyways? I mean other than just being an annoying hick."